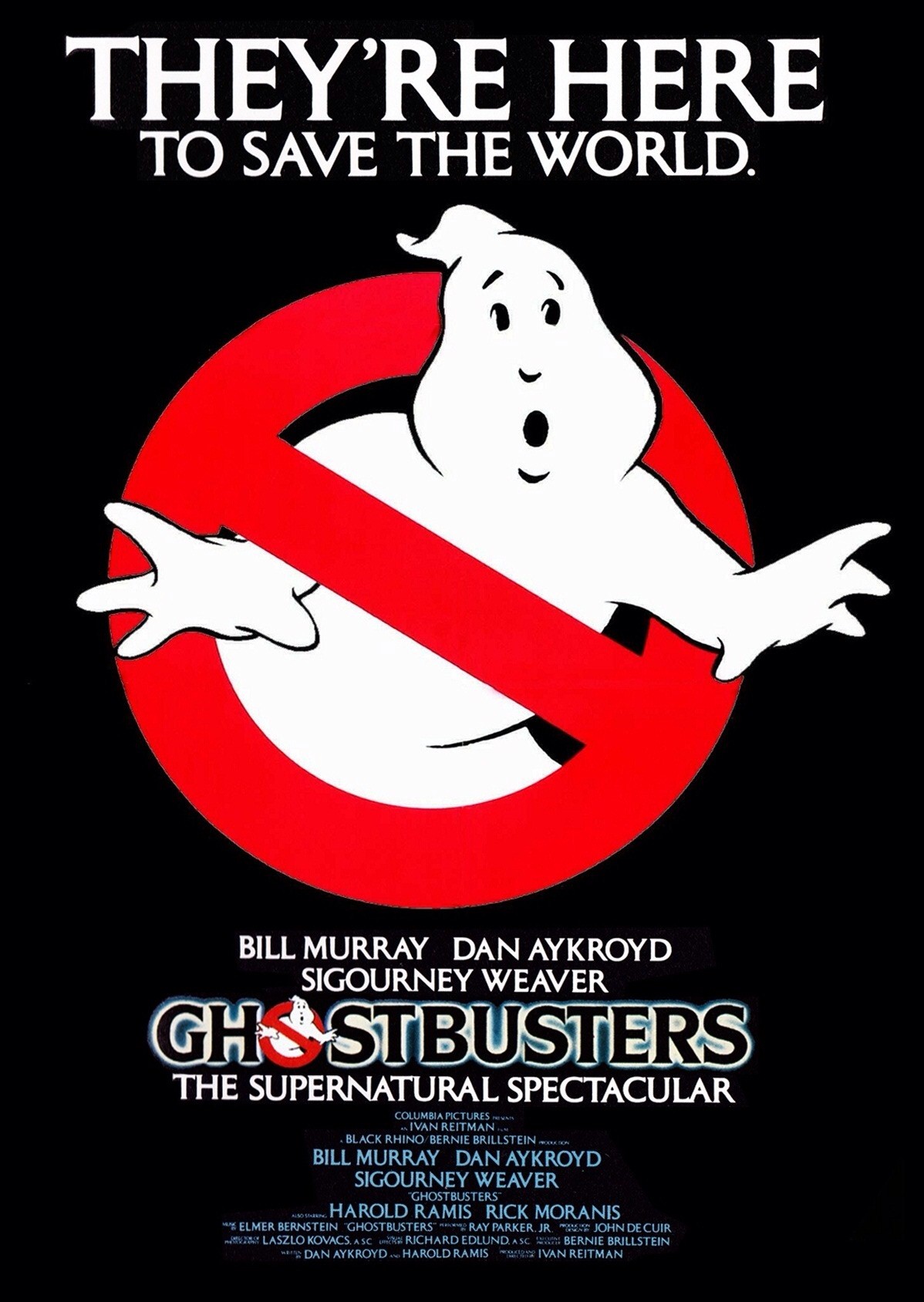 “Ghostbusters” almost feels like it was the little movie that could type of scenario. The premise and screenplay of the film had been toyed around for many years leading to its 1984 release. Originally conceived from star Dan Aykroyd’s interests in paranormal science, the idea dates back to his Saturday Night Live days in the mid-1970s.

The original concept of the film would have been Dan Aykroyd and fellow SNL cast member John Belushi as “Ghostsmashers”, traveling through dimensions fighting ghosts and other paranormal beings. Belushi’s death ultimately shelved the project for a few years before taking the idea to Ivan Reitman and Harold Ramis.

Ramis reworked the script with Aykroyd, Reitman signed on to direct, and the great Bill Murray was approached to star, and the rest was history.

The greatest attribute the film has is it’s marvelously assembled cast. It may very well be the perfect comedic film ensemble in history. Bill Murray (Peter Venkman) brilliantly delivers his dry and sarcastic humor to every scene. Even though he is an astute psychological scientist, he brings a very lackadaisical attitude to the group, almost as if he doesn’t even believe in the paranormal, even though he does. Dan Aykroyd (Ray Stantz) is an interesting combination of both full-on-comedy and a straight man. At times he can be super serious while spewing a multitude of scientific lingo and research, and then at times he acts somewhat childish and slightly over-the-top. He’s more of a lovable, yet slightly strange, scientist-type character.

Harold Ramis (Egon Spengler) is more or less the completely straight version of Aykroyd’s character with his dryness raised to a ten. He might be the most believable scientist of the three, and part of that is his ability to deliver his dialogue in a short and defined manner. Plus how can you dislike a character who spends their time collecting molds, spores, and funguses? 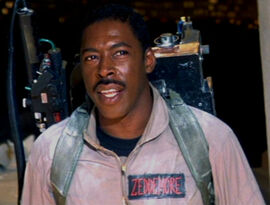 The Ghostbusters crew is rounded out by Ernie Hudson (Winston Zeddemore), who shows up about halfway through the film via a help wanted advertisement. Hudson basically plays the everyman-type character and is the audience’s perspective of the film. He’s just a dude off the streets with no paranormal experience and has been tossed into an otherworldly scenario. This makes him the perfect sympathetic character the audience can get behind.

(Fun Fact: In original drafts of the script, the Winston character had a much larger role in the film but the part was scaled back to bolster up Bill Murray’s Venkman character. During the early stages of casting, Eddie Murphy was at one time considered for the Winston role.)

The film also features some great supporting roles such as Sigourney Weaver as Dana (a client of the Ghostbusters who finds an inter-dimensional being named Zuul in her apartment), Rick Moranis as Louis Tully (the dimwitted schlub who lives next door to Dana), Annie Potts as Janine (the Ghostbusters secretary), and William Atherton as Walter Peck (the EPA lawyer trying to get the Ghostbusters business shut down). Weaver plays a great everywoman character and has fantastic chemistry with Murray. Moranis is a clear standout in the film. He’s obviously way out of Dana’s league, yet he continues to attempt some sort of relationship with her. I feel if there was such a thing as a film character dictionary, the word “dork” would have Rick Moranis’ picture underneath. Nobody plays it better.

(Fun Fact: The original pick to play Louis Tully was John Candy, however Candy could not commit to the project, which was still in its early stages. He would end up appearing in the Ray Parker, Jr. “Ghostbusters” music video.)

Annie Potts is a great as the no-nonsense, carefree secretary who may or may not have some kind of a fling going on with Egon. Her character is perfectly summarized with her line, “I’ve quit better jobs than this.”

Walter Peck (Atherton) is a great side villain playing the pesky government official who is just as smarmy as he is shrewd and potent. Even though it literally comes out of nowhere, seeing Peck smothered by melted marshmallow towards the end is very satisfying.

I think one of the reasons why “Ghostbusters” is so revered as a comedy is due to the subtleties within most of the jokes. My personal opinion of comedies today are that they seems to be overflowing with random bathroom humor and excessive swearing, which is more often than not used as a crutch. There have been some good comedies released this year (most notably Shane Black’s “The Nice Guys”), but the quantity usually outweighs the quality. In a way, it’s similar to my feelings on modern day horror films, but that’s another subject for another time.

What I love about the subtle humor in “Ghostbusters” is that it somewhat brings the audience’s thoughts into the narrative. Perfect example would be when the 3 Ghostbusters are in a hotel elevator while answering their first call. 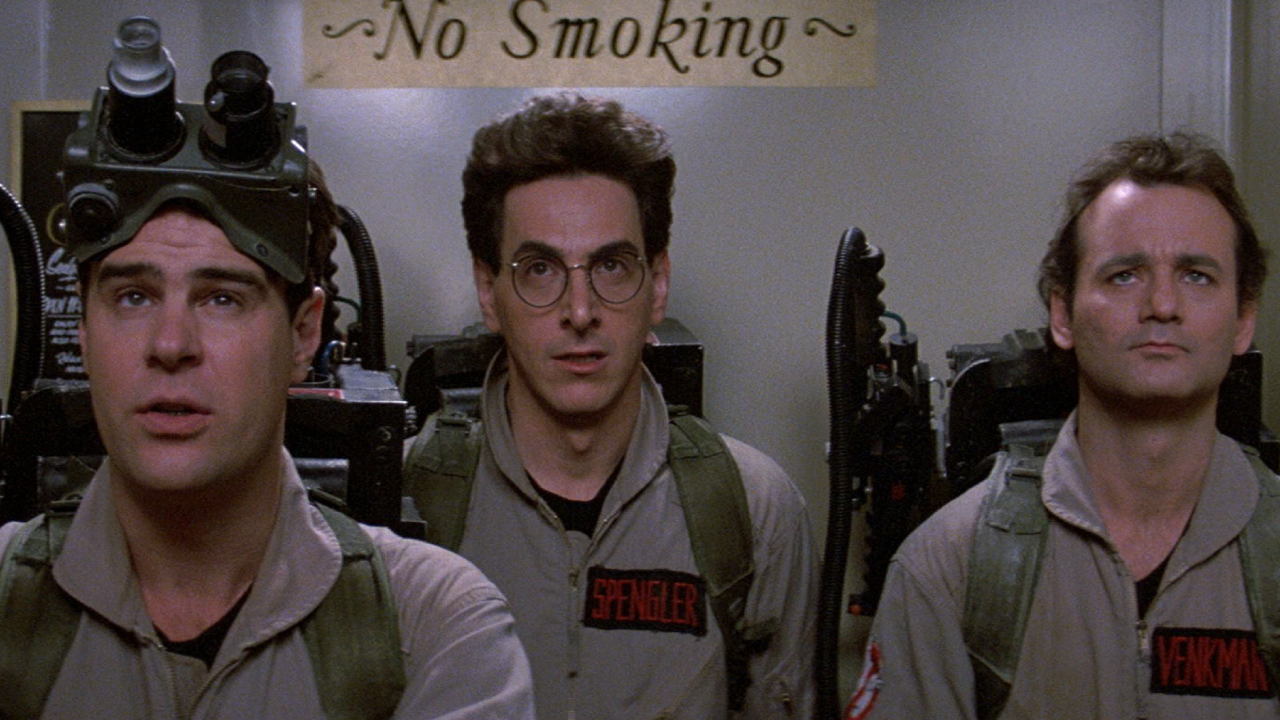 Ray explains how he regrets not properly testing the proton packs on their backs beforehand. Venkman refers to them as unlicensed nuclear accelerators as Ray asks Egon to start his up. Egon pulls the switch on Ray’s proton pack, which then emits an abnormally high frequency sound. Then in the most subtle of ways, both Egon and Venkman slowly move away from Ray in fear of his pack. The joke works on numerous levels. Ray forgetting to test the nuclear equipment, Venkman’s matter-of-fact joking, and the two guys attempting to move away from Ray’s pack while stuck in an elevator.

Even though it’s been well documented that the screenplay for the film went through numerous rewrites (to the point where Reitman, Aykroyd, and Ramis all spent three months in Martha’s Vineyard finishing up the final script), the story remained fairly simplistic. We get a good sense of who the characters are, what the problem is within the story, who’s good, who’s bad, and how can we stop it.

There really wasn’t a need to overly complicate the plot, which I applaud them for not doing, especially with a science fiction themed film. I don’t think if the movie was made today that this would be the case. We slowly unravel what Zuul is and the ultimate villain being Gozer.

Speaking of Zuul and Gozer, another thing I love about the film is that, in my opinion, the effects still hold up today. Most of the ghosts (excluding a few that populate the city during the shutdown of the containment unit) look pretty damn good, even though most were done using stop motion and puppets.

The Slimer puppet looks ten times better than the new CG Slimer from the reboot earlier this year. Add on top the cool practical effects from the opening scene in the library and the forced perspective/miniature work used with the Stay Puft Marshmallow Man.

The only effects that don’t quite hold up today are all the shots of the Terror Dogs running and jumping around. The matting isn’t quite right and the stop motion on those really show it’s age. Other than that, everything else is still top notch.

As with every great comedy, there has to be numerous quotable lines from the film that can be parlayed into everyday life. “Ghostbusters” is no exception.

There’s at least 100 more that could be listed. Go ahead and check out the IMDB page for all of them. Of course one of the most notable things “Ghostbusters” is remembered for is it’s iconic theme song by Ray Parker, Jr. Even though the song is a blatant rip-off of the Huey Lewis song “I Want A New Drug,” the upbeat nature of the song along with Parker, Jr.’s lyrics transforms the theme into a fun and catchy tune that gets the audience’s attention.

(Fun Fact: Huey Lewis did end up suing Ray Parker, Jr. for the song which resulted in a settlement out of court.)

Along with the theme song, the score of the film (composed by Elmer Bernstein) also creates a lighthearted and witty atmosphere throughout the comedic portions in the film. The score also mixes in some slow brooding tracks, most notably the opening library scene, that do create some unnervingly creepy atmospheres.

(Fun Fact: When adjusted for inflation, Ghostbusters remains the highest grossing comedy of all time in the U.S. By today’s statistics, the film would have earned a whopping $616 million domestically.)

As successful as the original “Ghostbusters” was, it’s still baffling that it took five years to make the sequel. Since I highly doubt “Ghostbusters II” will be receiving a blog article, I guess now is the best time to address the elephant in the room. For as much hate and disgust “Ghostbusters II” gets, I actually don’t think it’s that horrible of a movie.

There’s some interesting ideas like the river of ooze and Vigo. The main issue with the sequel is that it feels a bit rushed (which is funny considering how long it took to make). The plot elements in the sequel, at least to me, feel like they should’ve been used for a Ghostbusters 3. They quickly brush aside the events of the first movie and end up being sued by New York, which leads to them losing their business. For starters, that’s a pretty big deal and could have been it’s own movie but instead it’s quickly mentioned at the beginning and that’s it (even though I do enjoy the gag of Ray & Winston working birthday parties).

They also introduce a baby with Dana, who is not Venkman’s, and the father is mentioned in a throwaway line. It felt like someone wanted to include a baby into the movie but also wanted to redo the story of Venkman winning over Dana, so they settled on a lazy missing father trope.

One of the main complaints about “Ghostbusters II” is that the story is almost identical to the original. Yes, it has some elements that are generally the same, but how radical could you have really taken the concept of Ghostbusters? But to say it’s identical is just not factually true. This isn’t a “The Force Awakens” situation.

Even though the original is undoubtedly funnier than it’s sequel, there are still some iconic lines in number two. Warming up the proton packs as Egon slips his name in is fun, and Bill Murray playing photographer with Vigo’s painting is laugh out loud funny.

Is it as good or as funny as the original “Ghostbusters?” No, of course not. But there are some redeeming qualities in the sequel. I wish I could say the same about the most recent reboot.

Overall, “Ghostbusters” may be one of the funniest films of all time. The concept is pure genius, not just from a science fiction standpoint, but also in terms of marketing. This little movie that almost didn’t get made has turned into a cultural phenomenon, and for very good reason.